RE-MASTERTM is an expert system program dedicated to repowering of conventional steam plants with gas turbines.

The program starts with a STEAM MASTER model of the existing power plant and allows rapid, accurate evaluation of the various repowering options.  RE-MASTER does both the design and off-design analysis.  Its design phase accurately reflects the reality of repowering, where certain items of equipment already exist with known characteristics, and other new items have to be designed to mesh with them.  RE-MASTER handles the thermodynamic and heat transfer details of all viable modes of repowering, including "hot windbox", "boiler replacement", "feedwater heating", and "parallel repowering".

HOT WINDBOX REPOWERING is accomplished by installing a gas turbine to provide extra power and direct its exhaust into the original boiler's windbox with or without precooling. This renders the original air preheater unnecessary, so it is removed and the heat it normally recovers from the flue gases becomes available. This heat can be recovered by new economisers installed in place of the original air preheater.  These economisers would heat feedwater, which partially bypasses the original feedwater heaters as described for feedwater repowering.  The turbine bleed steam is reduced due to lower water flow through the original feedwater heaters.  Thus, steam flow through the LP section of the turbine increases and more power is produced by the steam turbine, if its capacity allows, in addition to that produced by the new GT(s).  If the steam turbine generator capacity is the limiting factor, the fuel input to the boiler would have to be curtailed.

FEEDWATER HEATER REPOWERING is accomplished by installing a gas turbine to produce additional power.  Its exhaust energy is used to heat a portion of the feedwater in the original plant, which bypasses the existing feedwater heaters.  Thus, the feedwater heaters draw less steam from the turbine bleeds than in the original steam plant, saving some steam which can expand to the condenser and produce additional ST power, assuming its capacity permits.  If the steam turbine/generator capacity is the limiting factor, the fuel input to the boiler would have to be curtailed.  The increased power output of the steam turbine augments the additional power added by installing the new gas turbine.  Operational flexibility is provided by being able to run the GT alone when the steam plant is shutdown, and the original steam plant can run utilizing existing feedwater heating when the GT is unavailable. 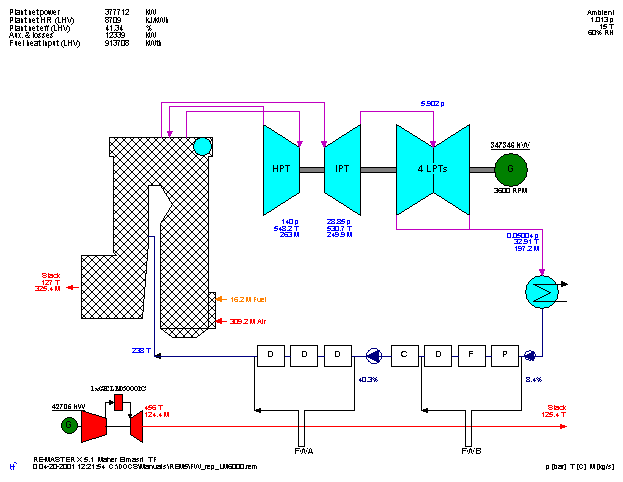 BOILER REPLACEMENT  uses a new GT/HRSG train as for a new combined cycle, except without a new steam turbine or condenser.  The HRSG is designed to match the existing steam turbine conditions, with steam production capacity to suit the existing steam turbine.  The original boiler is taken out of service, and so are the feedwater heaters.  The elimination of steam extractions for feedwater heating will impose flow conditions on the steam turbine that deviate significantly from its original design, and RE-MASTER fully consider them and assist the user in making appropriate selections to handle them.

PARALLEL REPOWERING  is the procedure of building a new GT/HRSG train as for a new combined cycle, except without a new steam turbine or condenser.  The HRSG is designed to match the existing steam turbine conditions, but with partial steam production capacity.  The rest of the steam for the existing turbine comes from the original boiler, which is operated at reduced load.